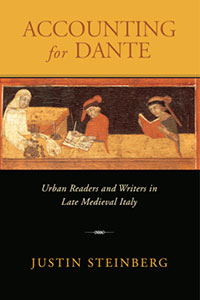 The William and Katherine Devers Series in Dante and Medieval Italian Literature, Volume 8

Winner of the 2005 Aldo and Jeanne Scaglione Publication Award for a Manuscript in Italian Literary Studies, Modern Language Association

In Accounting for Dante, Justin Steinberg reexamines Dante's relation to his contemporary public, an audience that included those poets who responded to Dante's early work as well as the readers who first copied, preserved, and circulated his poetry. Based on original research of manuscripts and documents, Steinberg's study reveals in particular the importance of professional, urban classes—namely, merchants and notaries—as cultivators of early Italian poetry.

Although not officially trained as glossators or scribes, these newly educated readers were full participants in an emergent vernacular literature, demonstrating at times a marked degree of sophistication in their choices of which lyric poems to include in their personal anthologies. Adapting their methods of memorializing contracts and keeping accounts to the collecting of medieval Italian poetry, these urban readers and writers made copying Italian poetry a crucial aspect of how they understood and represented themselves as individuals and communities. Steinberg describes how notaries and merchants transcribed Dante's poetry in nontraditional formats, such as in the archival documents of the Memoriali bolognesi and the register-book Vaticano Latino 3793.

In bringing to light evidence of the urban reception of the early Italian lyric, Justin Steinberg restores the political, social, and historical contexts in which Dante would have understood the poetic debates of his day. He also examines how Dante continuously responded in his literary career—from the Vita Nova, to the De Vulgari eloquentia, to the Commedia—to the interpretations and misinterpretations of his early lyrics by this bourgeois audience.

JUSTIN STEINBERG is assistant professor of Italian at the University of Chicago.