Dante and the Grammar of the Nursing Body (2003) 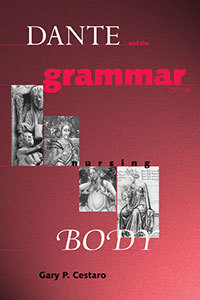 The William and Katherine Devers Series in Dante and Medieval Italian Literature, Volume 5

Dante and the Grammar of the Nursing Bodytakes a serious look at Dante's relation to Latin grammar and the new "mother tongue" – Italian vernacular – by exploring the cultural significance of the nursing mother in medieval discussions of language and selfhood. Inspired by Julia Kristeva's meditations on the maternal semiotic, Cestaro's book uncovers ancient and medieval discourses that assert the nursing body's essential role in the development of a mature linguistic self.

At the same time, these texts ultimately dictate the rejection-the metaphorical death and burial-of the nurse as a prerequisite to full-blown subjectivity and symbolic language. The nurse and her fluid body bespeak horror to Latin culture and its rational structures. Cestaro explores Dante's reception of this idea through several traditions: discourses on first-language acquisition and grammar; colorful allegorizations of lactating Lady Grammar with her whip; moralized readings of Virgil as a tale of individual human growth; and Neoplatonic descriptions of thechora, universal wetnurse in the story of creation.

The opening chapters locate traces of the nursing motif in Dante's minor works and particularly in his Latin treatise on the mother tongue, De vulgari eloquentia.Cestaro argues that a primal scene of suckling motivates the poet's musings on language and brings the work to its premature end. Subsequent chapters explore the evolution of the nursing body in the Comedy: from the parodic anti-nurse ofInferno (archetypically Circe with her poison milk), to the Christian deconstruction and reconstruction of selfhood in intimate association with female nursing on the mountain of Purgatorio.

The book ends in Paradiso with a dramatic metaphorical celebration of the nursing body as a site of eternal truth and emblem of the resurrected body promised by medieval Christianity. Dante thus undoes traditional notions of selfhood as opposition to the fluid body in a uniquely Christian and vernacular poetic key, a feat worthy of his cultural role as pioneer poet in the mother tongue. Scholars interested in probing psychoanalytic questions in medieval and early modern texts will find Cestaro's study useful for the productive relationship it forges between historical specificity and contemporary theory.