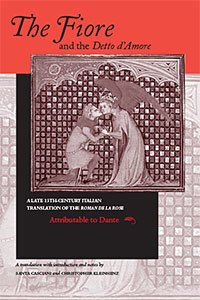 Translated, with introduction and notes, by Santa Casciani and Christopher Kleinhenz

The William and Katherine Devers Series in Dante and Medieval Italian Literature, Volume 4

This is the first English translation of Il Fiore, the late-thirteenth-century narrative poem in 232 sonnets based on the Old French Roman de la Rose, and the Detto d'Amore, a free-wheeling version of many Ovidian precepts of love in 240 rhymed couplets.

The elaborate allegory of the Fiore presents the complex workings of love, understood primarily as carnal passion, in the human psyche through the use of personifications of a wide array of

characters who engage in various social (and bellic) interactions. There are personifications of social stereotypes and attitudes, mythological figures, abstract qualities, psychological and physical states, and personality traits.

The importance of these two works lies in part in their possible attribution to Dante. But even if Dante is not the author, the Fiore is a valuable witness to the literary taste and cultural concerns of medieval Italy and to matters of poetic influence and reception among different literary traditions.

This volume includes the full original text of both the Fiore and the Detto d'Amoretogether with facing page translations. It also includes three indexes: the Rubrics for the Fiore, the Characters and Places Mentioned in the Poems, and a General Index which includes references to footnotes.

INTRODUCTION TO THE FIORE

INTRODUCTION TO THE DETTO D'AMORE

THE RUBRICS OF THE FIORE

INDEX OF CHARACTERS AND PLACES MENTIOINED IN THE POEMS

SANTA CASCIANI is Director of the Bishop Anthony M. Pilla Program in Italian American Studies at John Carroll University in Cleveland and co-editor of Word, Image, Number: Communications in the Middle Ages.

CHRISTOPHER KLEINHENZ is Professor of Italian and Chair of the Medieval Studies Program at the University of Wisconsin-Madison. He is the editor ofDante Studies and co-editor of Saint Augustine the Bishop: A Book of Essays(1994), and Fearful Hope: Approaching the New Millenium (1999).