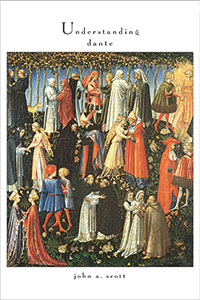 by John A. Scott

The William and Katherine Devers Series in Dante and Medieval Italian Literature, Volume 6

"Dante and Shakespeare divide the modern world between them; there is no third."Understanding Dante attempts to explain and justify T. S. Eliot's bold claim.

John Scott offers readers at all levels a critical overview of Dante's writings: five chapters deal with his New Life of love and poetry (Vita Nova), the Banquet of knowledge (Convivio), his Latin treatise on language and poetics (De Vulgari Eloquentia), Italian lyrics (Rime), and his blueprint for world government (Monarchia).

The next five chapters concentrate on Dante's masterpiece, the Comedy: its structure, Dante's worldview (still relevant today), and the Comedy examined as a poem. Much has been written on Dante's moral, political, and religious ideas; important as these are, however, such discussions are perforce limited. It is above all as a work of poetry that the Divine Comedy maintains its appeal to readers of all backgrounds and beliefs.

Firmly grounded in the latest advances of Dante scholarship, Understanding Danteoffers an original and uniquely detailed, global analysis of Dante as poet of theComedy that will be welcomed by those who read the poem in translation as well as by those fortunate enough to study the original Italian text. At the same time, Scott's book will be welcomed for its rich and insightful analysis of the whole corpus of Dante's writings, as well as Scott's mastery of the vast sea of critical literature in various languages. Scott bridges the gap that often exists between Dante studies in English-speaking countries and the great tradition of Dante scholarship in the poet's homeland.

No work in English about the great Italian poet can rival Understanding Dante's scope in both depth and breadth of close reading and critical vision.

JOHN SCOTT is a senior research fellow in the department of European Languages and Studies at the University of Western Australia.